The place for all your solar software; capture, stacking, post processing, ancillaries etc. It's all up for discussion here!
Post Reply
17 posts • Page 1 of 1

All the info readily available on the use of flats (to suppress NR and dust bunnies) is applied to surface images and not to applying them to full disk solar images.
Why is still so?
Full disk images also suffer from similar “defects”.....
One very successful method of obtaining solar flats is to use the clear plastic bag over the aperture.
I’ve been trying this method with SER videos (Firecapture) one video of the full solar disk and one with the plastic wrap in place. Using AS3! latest version V3.1.4. A master flat can be made as a tiff and then applied during the stacking of the solar disk. Sounds pretty straight forward.....
(Seems to work well with surface images)
After three days of trials, I found a major problem.

Summary: For full disk flats to work, the master flat image must be registered 100% with the solar disk stack/ individual frames. There’s no way I can find to actually do this! It really comes down to having ABSOLUTELY PERFECT Polar alignment with NO drift between the flat image and the solar disk stack/ individual frames.
Obviously my alignment wasn’t 100%
This is not a major problem when normally imaging, AS3! will make the necessary minor corrections to give a quality outcome. The problem is how to register the flat to the individual frames ( the flat is applied to each frame during the stacking process). I don’t know the answer, but I do know if you re-align the mount with some accuracy there is enough registration to remove NR etc.
I have some sample images showing the results. Still not perfect, but certainly an improvement in the suppression of NR.
If anyone has found a better more robust solution I’d love to hear about it.

Have you tried applying the flat in Firecapture?

David,
No, that’s something I’d have to investigate. I didn’t think it was possible.....

Doing a bit of google research, the FC flat examples I see are for solar surface not solar disk imaging.
I’ve been using FC for a few years now and embarrassed to say I didn’t know anything about its flat capabilities.
I’ll look a bit deeper.......

Tilt the camera and clean the chip?

That's going to be a lot easier than full disk flats Ken, been there, done it...

Mark,
I use the ASI 1600 at around f18 for Imaging full disk, even with a T2 tilter at Max I still get NR. The chip s very clean. I use daylight flats to check and remove notes etc.
I feel there must be an effective way of applying flats to remove residual NR from full disk images......

Maybe a Risley prism would help too?

I think it is impossible. I started using a program to eliminate the newton's rings for my PST full discs with the Chameleon. Called Pattern Suppressor.
Flats don't work for full discs and neither does a tilter (no idea how that works and still haven't worked it out).

I found the T2 tilter didn't work for me, but got a DAystar interference eliminator, that did. I got the c-mount version, if I was buying again I would get the T2 version instead.

The Risley AND the tilter together?

No, didn't try a combo of wedge/ tilter....
The NR are in a "fixed" position and orientation within the frame - independent of the location of the solar disk within the frame.
I'm finding that the "best" position (minimal NR interference) is to position the disk well up in the right hand corner of the ASI 1600 chip.
This position also gives the "best" false colour concentric image (Pedro's idea!) Why this should be so far from the centre of the frame, don't know.
I've clocked the DS a few times, maybe need to re-visit.

The attached images (taken on the 8th) show a before and after result, using the flat corrections in AS3!.
The weather hasn't allow any testing of the FC flat routine. 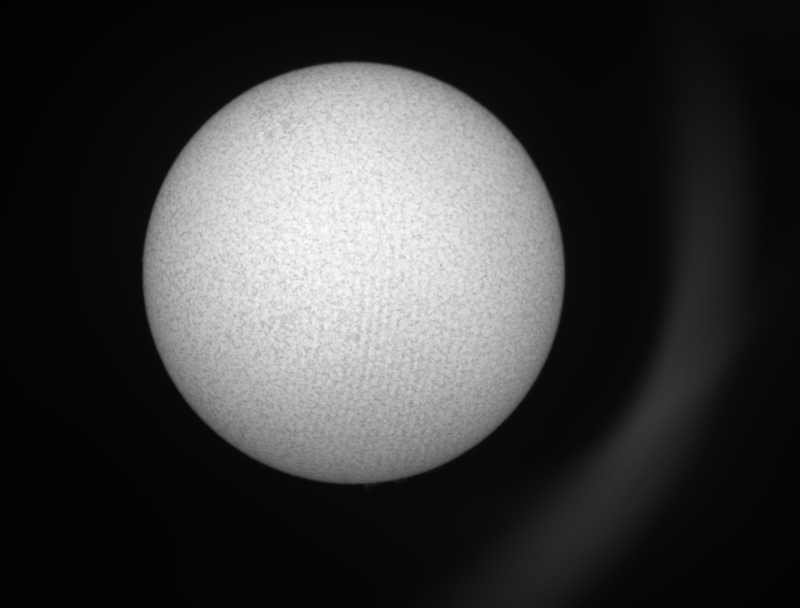 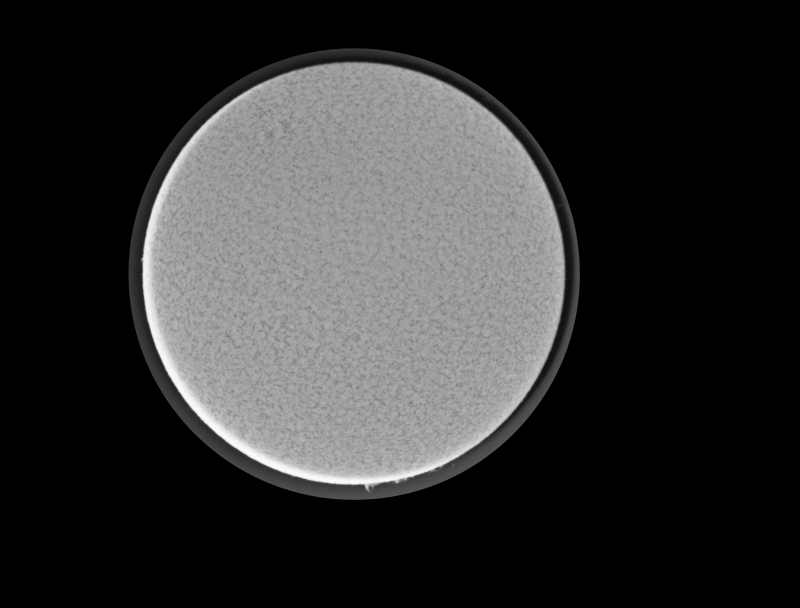 I haven’t applied flats in FC for full disk. But for high res it works great.

David,
Yeah, good flats seem to work well with surface images......it’s the full disk image which seems to be a (major!) problem.
It’s still CWW (Cold, wet and windy) down here so I’m playing with PS and the disk flats to see if it is possible to get better registration.
One issue with AS3! The final image size, depending on the stacking corrections, is not the same size as the full frame flat image!! I also don’t know where, within the frame, the centre of the solar disk ends up. Hopefully I can measure and assess the problem.
Onwards and slowly upwards.

I approached full and partial discs flat calibration from a lighting perspective from photography. Diffusion. We commonly seek to avoid diffusion in our glass in solar system imaging as we want higher contrast. But if we want soft gradients of light, we want diffusion, induced light scatter with soft edges, rather than a hard edge. Also, the placement matters, in terms of spectral highlights, so a small source far from the subject makes a hard line, no gradient, high contrast; but a large source, near the subject, appears much softer, more gradient, lower contrast. I realize this sounds crazy but for lighting in photography this is common and this concept is what I used for approaching generating a flat calibration for a disc image.

Partial and full discs work the same in terms of flat calibration because they have a hard edge and you have light source and void. The flat subtracts, so if you have a black space like that, it will invert it which wrecks the image and kills the limb. The reason flat calibration works with high res, or any FOV where the entire sensor is illuminated with HA light (or whatever wavelength), is because there's no black space. So to make a good flat calibration file for discs and partial discs, or any image where the limb is involved and we cannot avoid having the void of space in the FOV to generate the flat, we need to somehow get the HA light to spread out past the limb. But how do we do that? Ideally, an instrument that emits 656nm brightly behind a diffuser to spread it out and avoid gradients would do that. The same way we do flats at night. But how do we do this with the sun?

Well, treat the sun as your light source. And put the large diffuser modifier close to the subject to generate a soft, gradient spilling over the limb because of the scattered light from the diffuser material. If your diffuser material is too close to the objective, a hard line is created. So the material needs to be close to the objective, but not right on top of it. I find a few inches of clearance gives a nice soft gradient edge of diffuse HA light that is scattered past the edge of the limb of the disc. This scattering of light allows a flat to be made as you are essentially "inflating" the apparent size of the disc by diffusing it on material that glows from the scattering of the light.

So what material works? I found a cereal bag that was frosted/opaque worked very well. The problem is, some kill too much transmission, and some do not scatter much light. You have to find a semi-transparent material that has ok transmission and a high amount of light scatter (to be your diffuser). I went through a few boxes of cereal and found mine. I don't recall the brand but you can see the material in my images. It's cheap to try them lol.

When I do the flat, I put the disc where I want it in my FOV. Focus. Then cover the objective with the diffuser. I match exposure/histogram basically. Usually I have to do long exposure as the diffuser soaks up most transmission. It's ok to use lots of gain. I prefer to use longer exposure and less gain. The flat will take a while to generate and average a few frames due to long exposure. This is fine though as long as your tracking isn't bad. I generally average 21 frames for my flat generation and sometimes I'm in the 2~4 second exposure time range at low to mid-range gain. Create the flat this way (no defocusing). Then remove the diffuser. Change your exposure values back to something appropriate for the disc (it will be all saturated white of course when you remove the diffuser). So always remember to return exposure and histogram to normal levels without touching focus, etc after removing the diffuser.

Bag flat on a 60mm aperture: 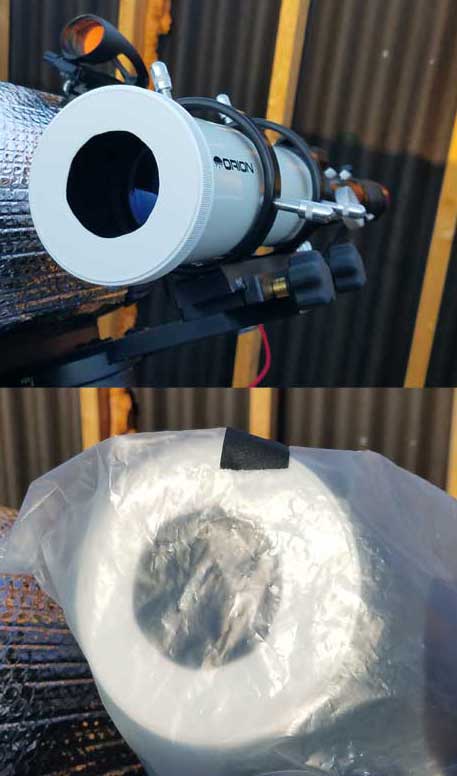 The Flat in firecapture (notice the edge of the disc in my flat is soft and has a gradient, that's the diffuser scattering HA light past the limb which is why this works): 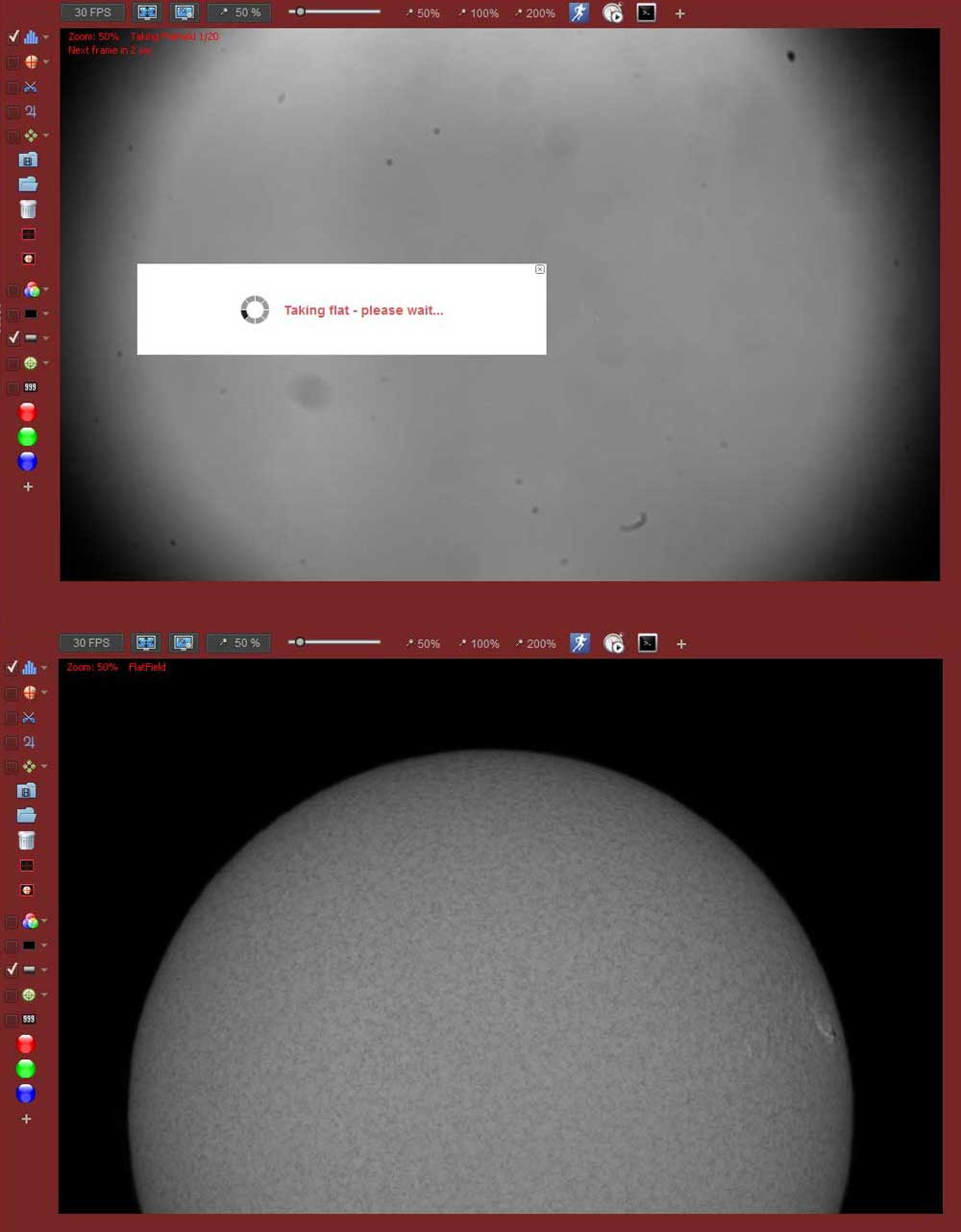 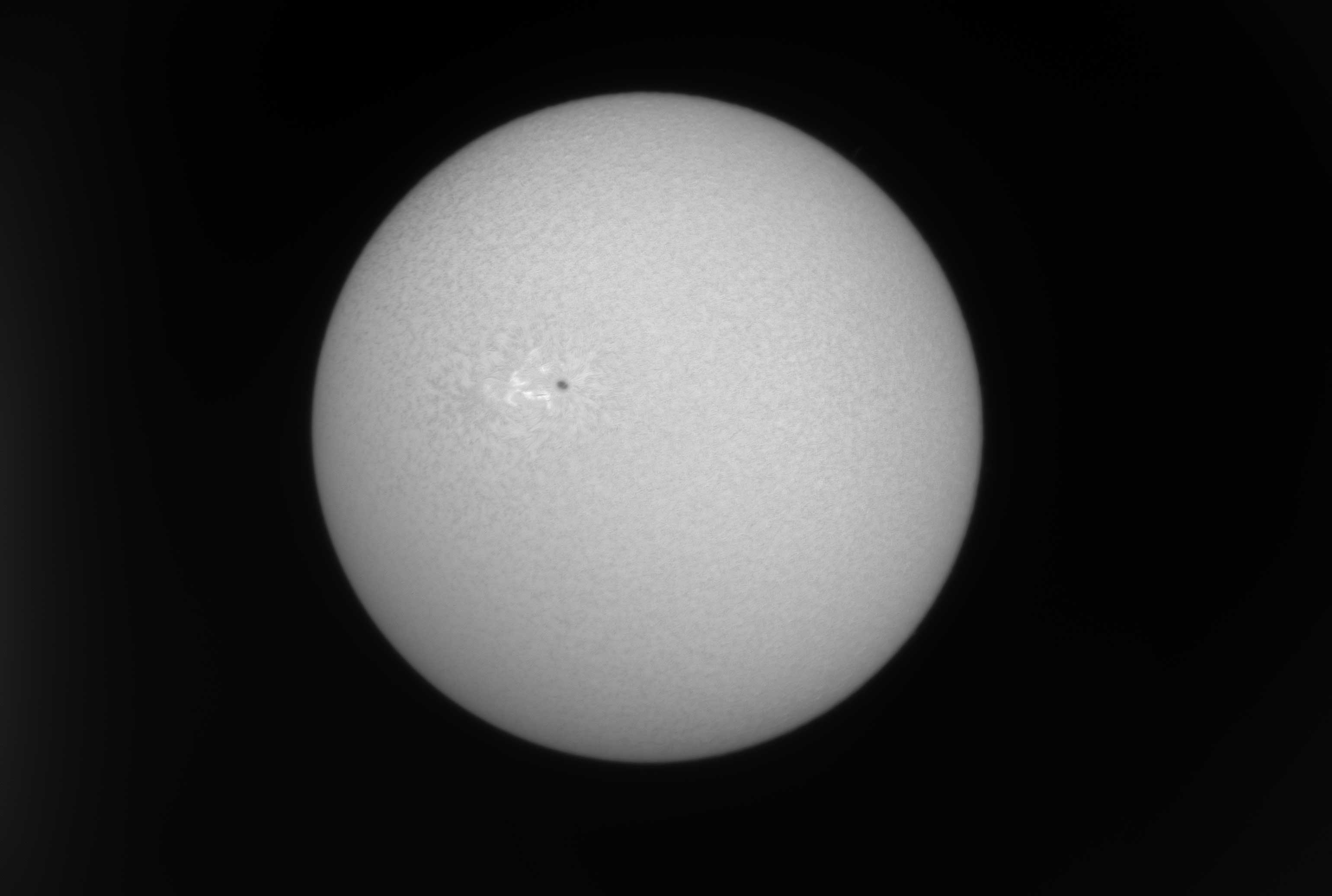 I made a box and put the opaque material on there to be a bigger diffuser here so that it would have even more gradient past the limb: Calibrated a full disc in FC real time with no funky edges and stuff. I think Daystar's "diffuser" cap will do this if you want to buy something commercial.

But a diffuser can be made with an opaque plastic bag. More scatter is better. But need high transmission (so cannot use a white shirt sadly).

Marty,
Do you have any examples where this is used to remove Newton Rings In the full disk image?

I think I understand your method - greater diffused flats....
I'll re-try my "experiments" using tracing paper (one or more layers) to obtain a "more diffuse" flat image.
Appreciate your response and information. Thanks.

The PST image had newtonian rings.

I'll have to try and re-create a situation with newtonian rings and the flat used soon. But almost all of my setups have a degree of newtonian rings. I use flats on everything to eliminate them.