A clear day here on Saturday and no rush to go anywhere allowed me to image and experiment with scope/filter combinations. As usual, the winter seeing was poor to start and terrible by the noon hour, but the shorter focal lengths involved for the full disk images was a bit forgiving. The AR's were almost around the western limb and only a few small proms were visible, but the filaments were the most prominent feature of the day

This first set of images are the full disks. The WL and CaK images were taken through the iStar 150mm, f8 OTA with the ASI1600MM camera. The WL image used a Lunt Solar Wedge/Baader Continuum filter set: The WL wedge was swapped out for the modded Solar Wedge/B1800CaK/Baader K-Line filer set for the CaK image: 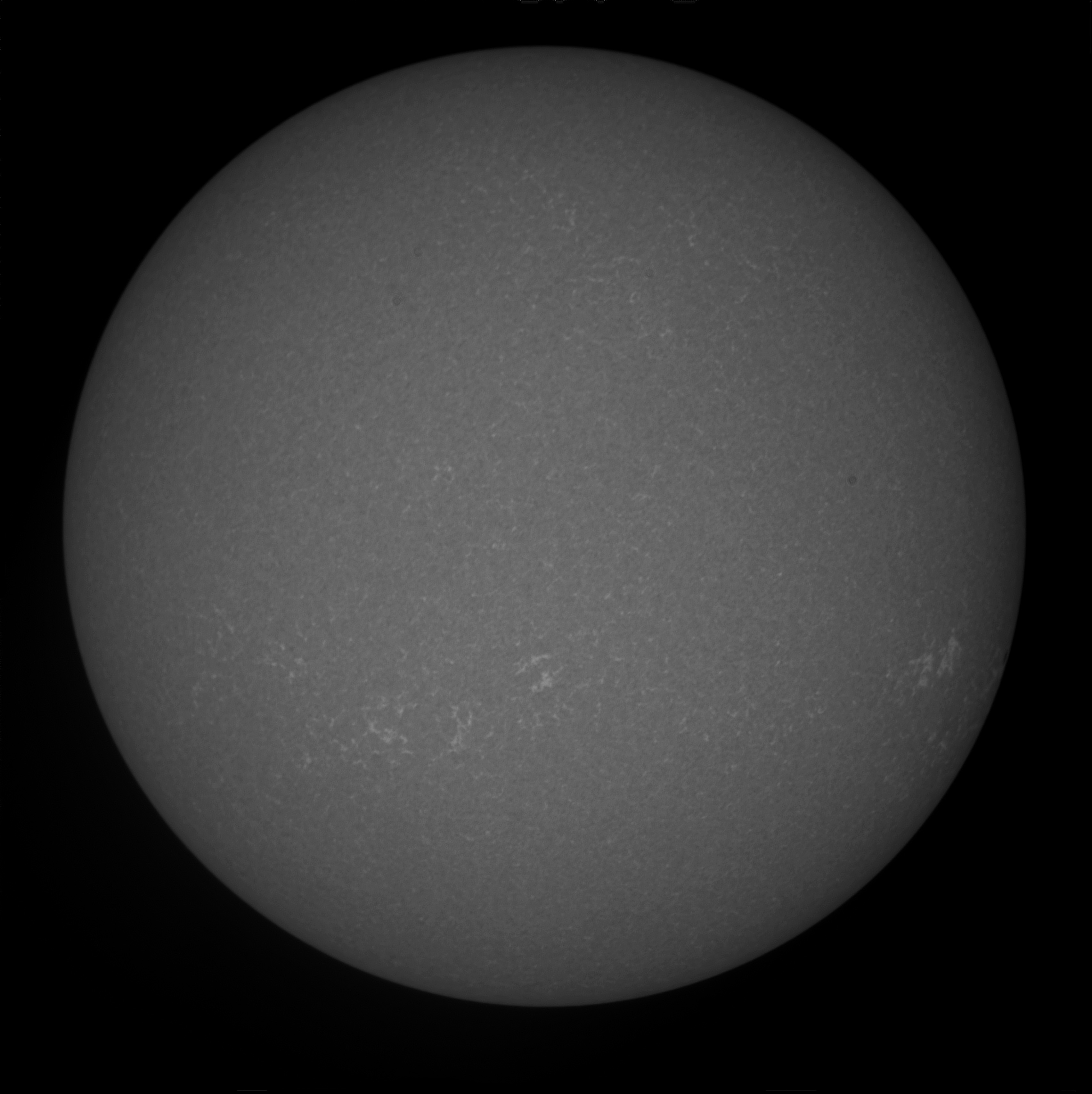 The next set of Ha images were through the LS80T and several DS options I have. The first image is the limb (inverted) with the disk blocked out...as mentioned there were few proms: 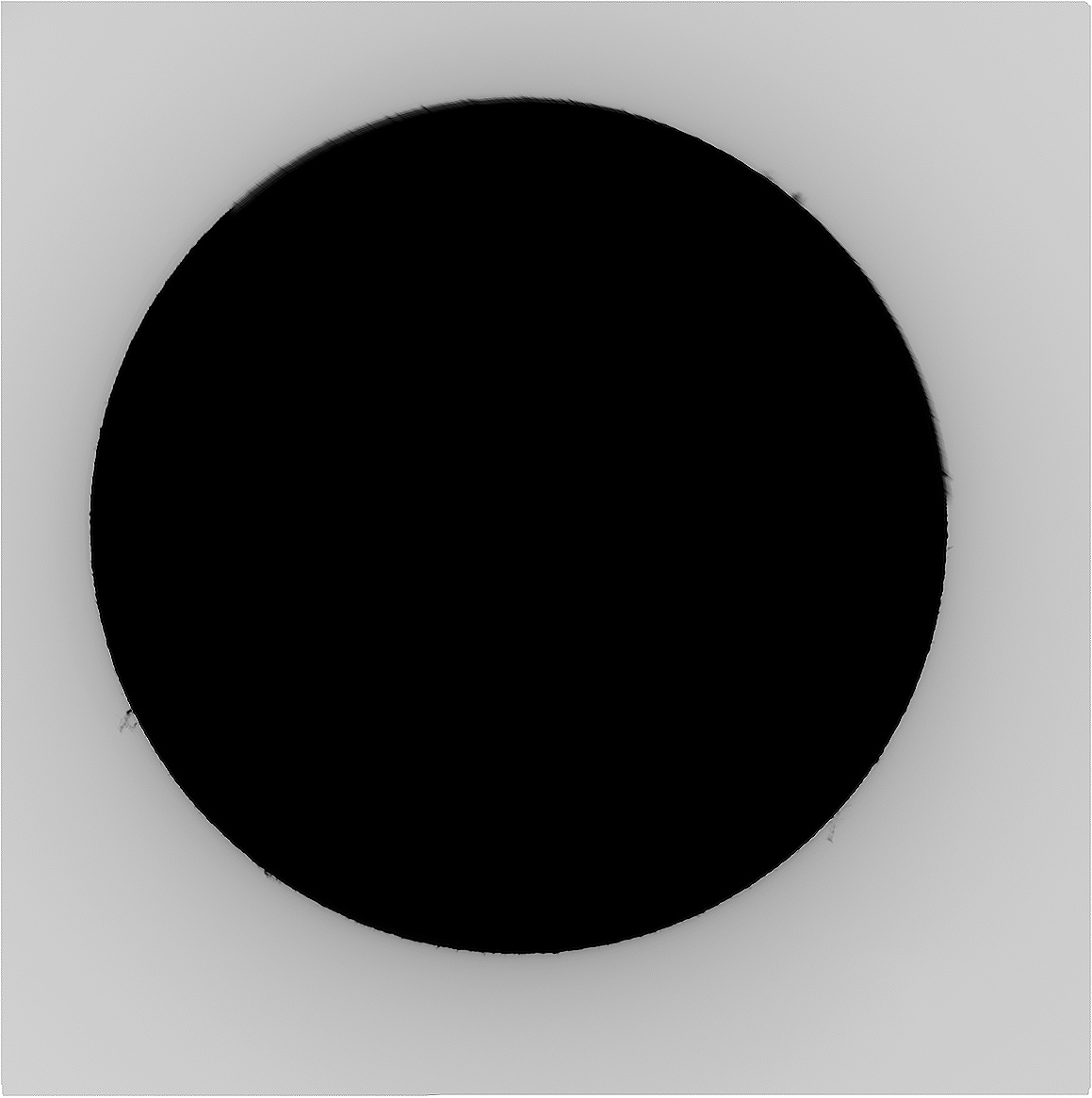 So the first DS image used the LS80T and front mount LS75FHa tilt etalon (used for the image above too): 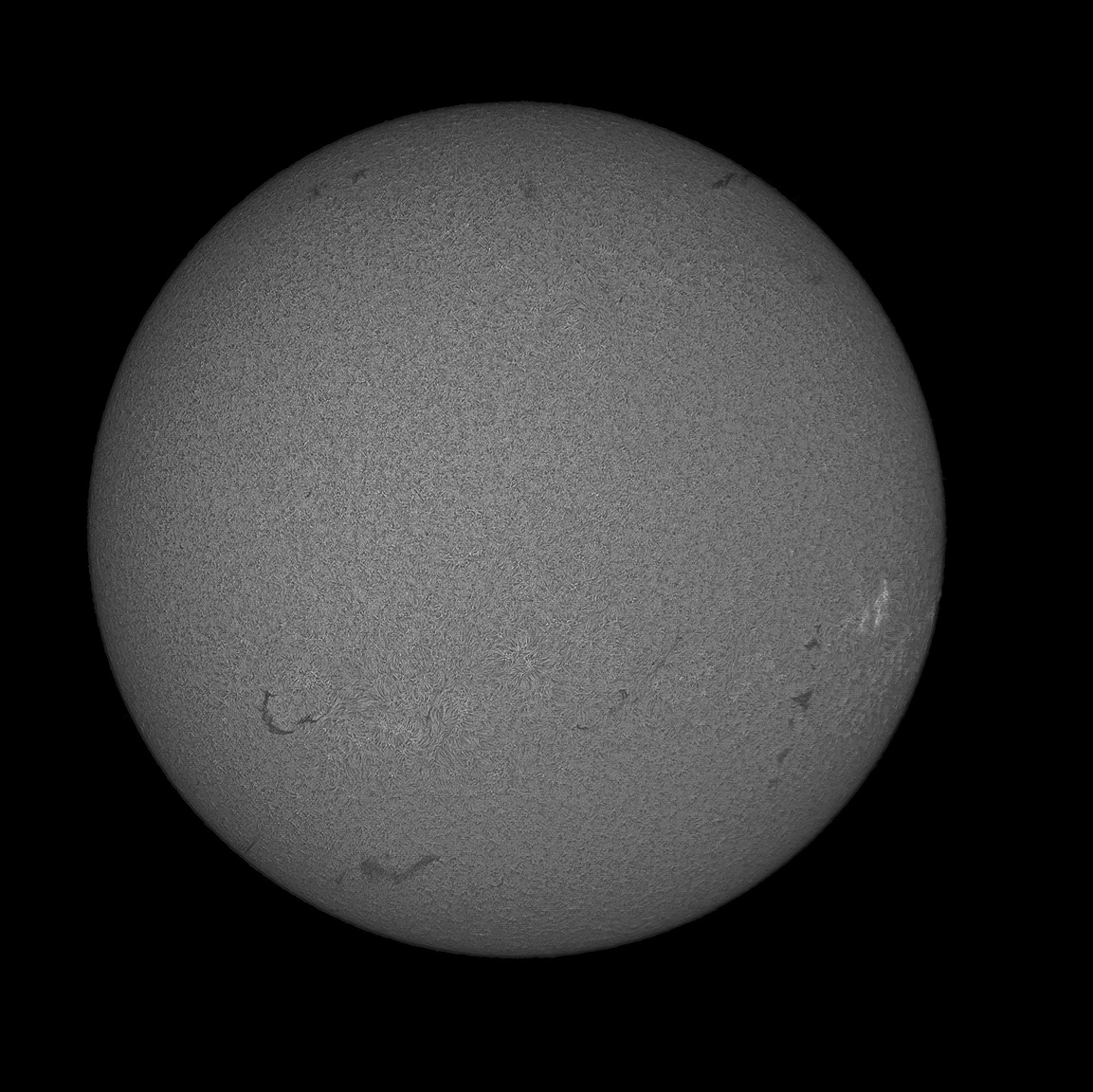 The second DS setup was with the DSII pressure tuned module added and the front mount etalon removed. The tuning could have been a bit better but I gave up after messing with it for 15 mins or so The last image is a triple stack with both DS etalons...the DSII and the front tilt etalon: 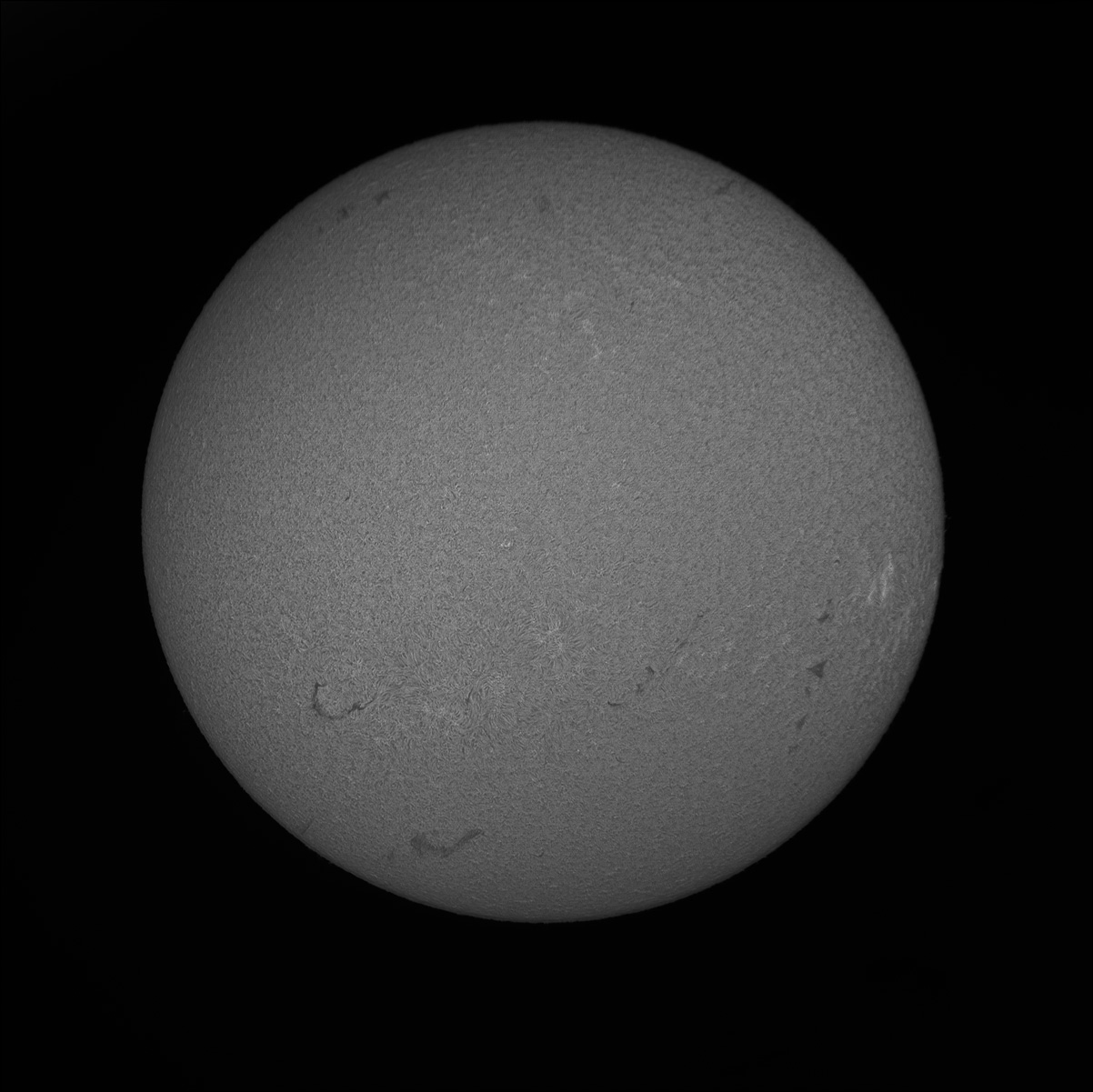 So here's my questions...of the three options which would you keep setup for the full disk images ?

The last image is a colourized version of the triple stack: I will have more images to add once I get the processing finished on the Ha set through the iStar OTA.

They came out well despite the winter seeing Brain. It's just nice to have sunshine and time to be able to observe at the same time. Cloud and grey for me this Sunday.

For a relatively quiet Sun, at least you captured the faculae well.

Tough call. The second image looks like it has been sharpened more than the others. Hard to pick a fav.

I took a second look through the images and I think I found a better comparison for the DSII internal module than the one originally posted. I made a new file with the 3 side by side for easier comparison.

The tuning is not the same across the three, so it isn't a completely fair test of the three. I'd still be interested to know what folks think of the options.

Hi Brian, all 3 are excellent but also different in their own respect. I like the contrast of the last one (right hand side), but the middle one has more sharpness.
Mark

I'm undecided between the middle and the right one (not that the left one is bad). I think if you sharpened the middle one a bit less (just a tad much I feel), it would be the best one.

As a question for you Brian, which of the 3 setups is the easiest to use and setup?
Mark

Brian, terrific shots but I would say the middle shot (tilt tuned double stack) and triple stack are the best, but not a great deal of difference between the two. So I would stick with the tilt DS if it is easier than triple stacking. I'm not keen on the pressure tuned DS

Our late afternoon snow disappeared overnight so we only have white left on the lawn now, it was pretty while it lasted

Nice comparison. The LS80T/DSII image looks familiar to me as that’s what I use. I have always thought your images with the LS75FHa were superior and would like to find one. The triple stack does show a little more but not much and probably at the cost of increased exposure and uniformity. It’s a tough call. Personally, I would say that the LS80T + LS75FHa is not only good, but good enough.;-)

Hi Brian, my comments on the comparison is exactly the same as Mark T., says, so thanks for the interesting add-on.

Thanks everyone for all the comments

I thought I posted an reply when Mark asked which was the easiest to use and setup, but it looks like I missed posting

As for the question, the scope and DS elements are left setup in the observatory, so it is not a big deal to use any of the set-ups. The triple stack (right most) image seems to have a little more faculae, mostly in the northern disk. I'd have to check the exposures in the three set-ups, but this was definitely the longest.

I generally have liked the DS using the front mount etalon, but it is a bit finicky to get tuned. Sometimes I wind up with a vertical band that is the most on-band and other times it is quite even like this session. I kept the DSII module that was intended to DS the LS80 as the etalon in my modded scope, and just kept life simpler by not changing back and forth. The LS75 is quite heavy and after getting my hands on a second DSII module I was hoping to be able to use it to DS both the LS80T and the modded scope.

The thumb screw mounting allows the DSII module to be quickly attached/detached to be moved between scopes. Both are still a work in progress, but the LS75 still looks to be the best bet to use for the full disk images. Ultimately, I was hoping to use the iStar OTA as a modular system with the ability to easily exchange the long travel focuser for WL/CaK work over to mount the DSII modules in the same mounting flange (with ERF added for Ha). If it works I can drop one of the 150mm OTA from the mount and cut the weight it is carrying. The iStar OTA and LS80T can be moved back to the dome as the MI250 mount in there will handle the lighter load, and leave the roll-off roof observatory with the EM400 to carry the C9.25 or C14 for deep sky and planetary imaging.

I'll post updates as I work through the project.

Just looked again on the 3 images and the right one is the best. Looks like the processing was also a bit different as the middle one looks more grainy and the left one lacks contrast.

WoW, You and Pedro are have both imaged in triple stack today. Like his, your results are outstanding. Nice work Brian!

Nice images, Brian. The triple stacked images look great, but I suspect the longer exposures might make it tricky to use when the seeing conditions are borderline. Probably excellent in good seeing conditions, but more often than not you might need the faster speeds that double stacking will give you.

Don't know much about how you process and what do you mean by single stack, double and triple.. Are they videos stacked and then merged the results? I usually use PIPP and Autostakkert to do planetary and sun stackking from original videos. What software do you use?

Thanks for the comments everyone...always appreciated

Rainer, I tried to process equally, though i did not spend a lot of time trying to fine tune each. The left most was not tuned to my liking but was not making any headway at the scope getting it better so I used the best I had, which did not have the contrast of the front mount etalon.

Daniel, Pedro also posted a series of images like this (his were colourized). In my case, the stacking was done in AVI Stack, processed in Astra Image (Lucy Richardson devolution), and final brightness/contrast tweaks in Photoshop.

Triple stack combos are not easy to manage. I have two SM60 but only one is good for imaging. I had to use a SM40 for my triple stack and the aperture reduction is a drawback

Lots of fun playing with all the different permutations!

I hope you give the triple stack another chance sometime. I may have been a little premature in discounting the potential benefits. Following your and Pedro’s lead, I added another etalon to my LS80T/DSII and noticed an improvement in the filaments and brightness of the faculae. Using only a 40mm filter, the resolution I captured was less than the 80mm of course, but your 75mm would be better. Tuning, banding, and exposure time were definitely an issue with three filters but it did show potential.

Brian:
A very interesting session and comparison.
I think that 3 stacked setups are very sensitive to seeing conditions, but yours look good though the middle one is sharper.
Looks like you should keep trying.
Best regards and wishes for a good new year.
Eric.

Thanks Pedro, Phil, and Eric

I plan to do some more trial images in this configuration...maybe not a great setup for proms with the long exposures, but I'm liking the enhanced faculty and filaments in Pedro's and my images so far.

The smaller etalon adds to the difficulty.

marios i.
Almost There...