I LOVE finding out about different ways to appreciate the Sun and light in general. Use this forum to post your info or questions about various outside the mainstream ways to appreciate our life giving star!
Post Reply
10 posts • Page 1 of 1

Here is a collection of spectroheliograms taken on June 12. There was a bit of a delay in posting because I'm still experimenting with processing techniques. I set the instrument up for full disk views. It had previously been configured for closeups (using a ~3x barlow on the Celestron 4" SCT) and I actually regret having made the change for this session because it would have been more interesting to view the AR and prominence at higher magnification. Chalk it up to rustiness after a long time since last using the SHG. I also replaced the previous 2400/mm grating with a 1800/mm grating. This sacrifices some spectral resolution for better transmission in the UV. 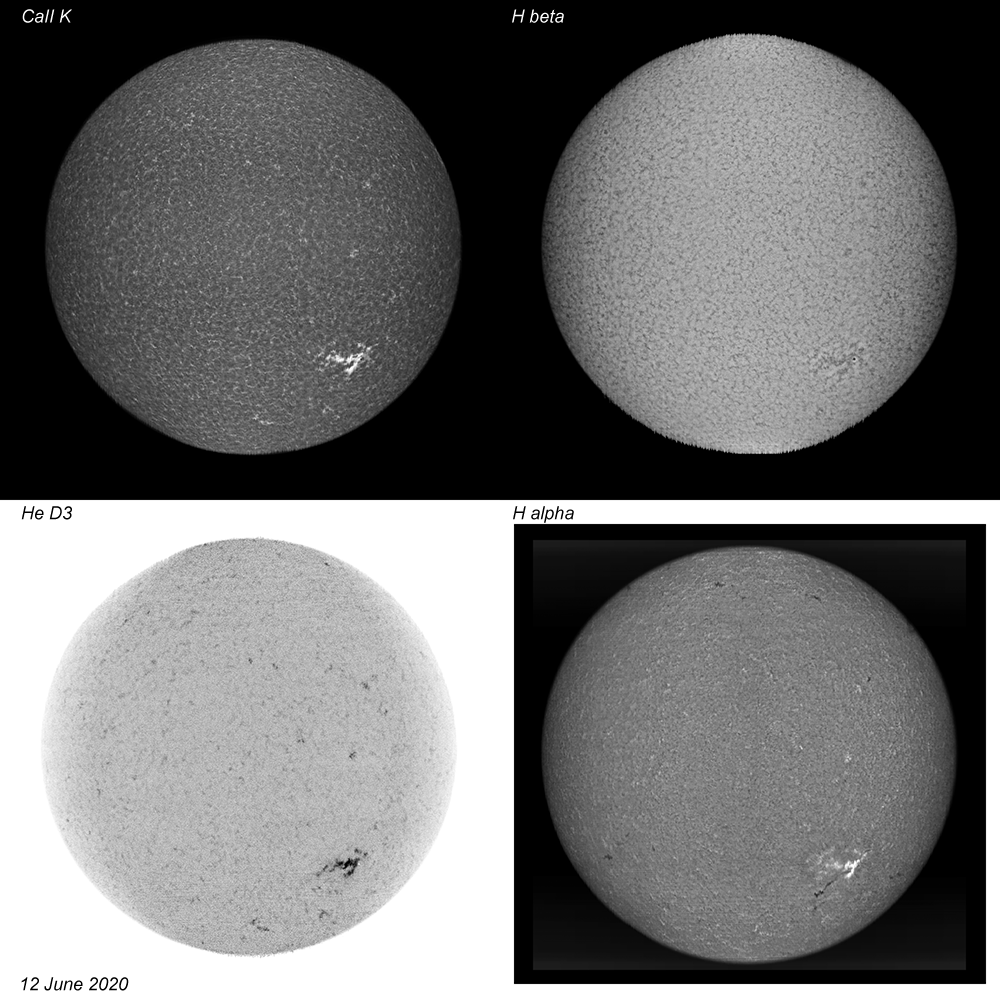 The second montage shows a series of images in H alpha. The SW limb prominence is evident in the upper frames which are composite images of prominence and disk. A blue wing image shows the expected similarity to H beta shown in the first montage. A dopplergram shows some evidence of complex plasma flow near the AR. 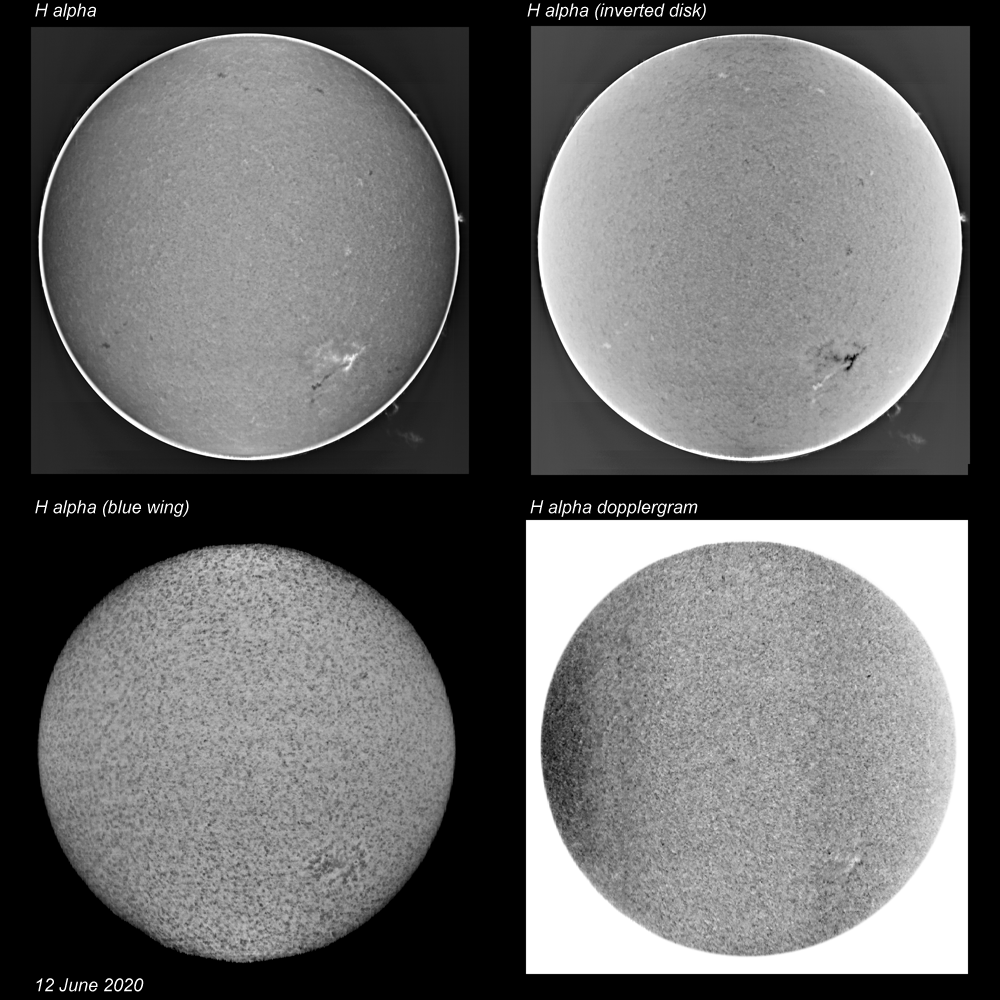 The third montage shows some images in the UV. These are composite images of prom and disk in the CaII K line. A blue wing CaII K line and an image taken in the CN bandhead (3883 angstroms) show strong similarity. The CN molecular band is interesting because magnetic bright points can be observed there (at high spatial resolution) with greater contrast than in the CH molecular G-band (~ 4300 angstroms). The required spatial resolution would be pretty challenging for a spectroheliograph. 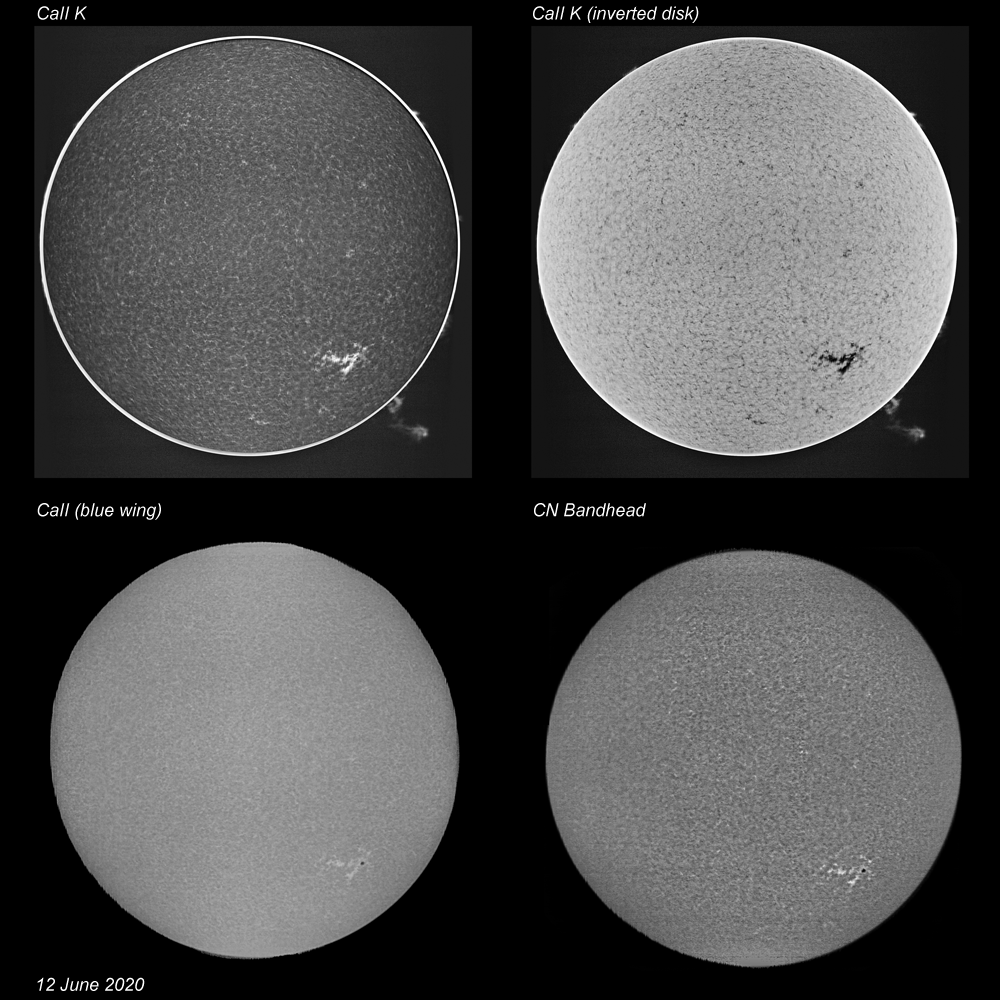 The SW limb prominence exhibited some interesting spectral behaviour. If only I had opted for higher magnification! Here is an image taken with an effective spectral resolution of about 2 angstroms. A coronal loop is evident along with a higher lying wispy structure. 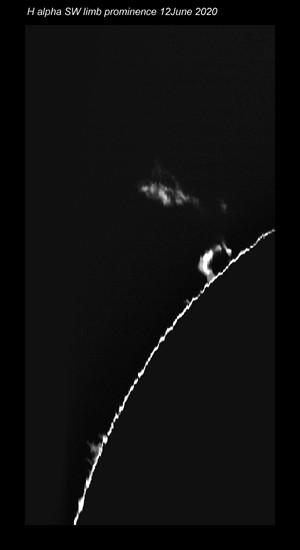 Anyway, it's good to be making spectroheliograms again! Hope you enjoy.

Peter, these are exceptionally good spectroheliograms. The quality is amazing.

The prom animation is absolutely fascinating and it would also be interesting to see these images stacked in colour, 'blue to red' to show in one image the entire prom and its velocity field.

Absolutely wonderful Peter, a thoroughly enjoyable and informative post, the animation is incredible together with marvellous views of the sun. I do like the He D3 how it is completely inverted to Halpha or CaK view

All my images at: https://flickr.com/photos/jochenmaes/

when it comes to this
you are truly
"Peter The Great"

Thanks for the comments, everyone (and the SPOD!).

Stu: Your idea of stacking these images as individually coloured frames is a good one. I'm not sure how to interpret the colour mixing that would result though. It seems to me the colour associated with some particular frame (and the associated velocity) would be lost in the mixing. I have to give this more thought. I have written a routine to calculate the doppler shift associated with an individual pixel in an image (using the spectrum associated with that pixel) and will experiment with this a bit more. In the meantime, here are some dopplergrams for this particular prominence. Orange (blue) regions correspond to receding (approaching) gas moving at, roughly, the velocities (km/s) indicated by the numeric labels. This gives an idea of which portions of the prominence are moving in what line-of-sight direction and at what speed (with respect to stationary gas at solar disk centre). The high-altitude, wispy portion of the prom and the coronal loop seem to clearly display opposite and fairly substantial line-of-sight velocities. 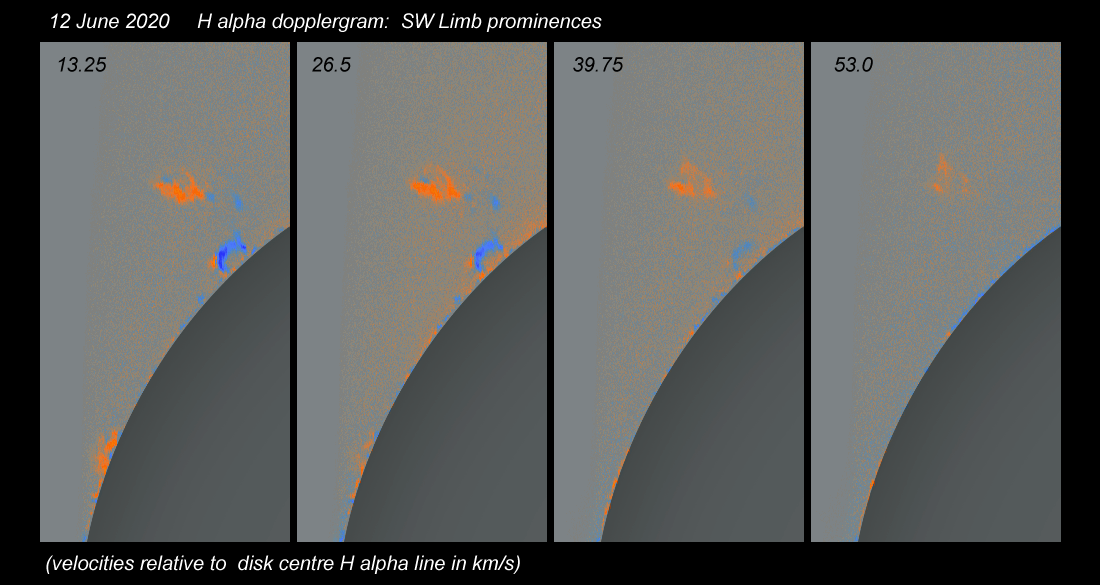 These spectroheliograms are facinating ! Thanks for sharing.
Le CN line is interesting. We don't see a lot of CN images.

Phil Rousselle
Oh, I get it now!