I LOVE finding out about different ways to appreciate the Sun and light in general. Use this forum to post your info or questions about various outside the mainstream ways to appreciate our life giving star!
Post Reply
7 posts • Page 1 of 1

My spectroheliograph caught aperture fever! After its pleasing first attempt at hydrogen alpha imaging viewtopic.php?f=8&t=32248, the foam board SHG demanded to be tried on a bigger scope. We therefore swapped the 480mm f6 APO for a 700mm f7 APO, keeping everything else the same. Since the slit is 3mm long by 10 microns, and at 700mm the image of the Sun is approximately 6.5mm, three scans were necessary to capture the entire Sun's disk and chromosphere using the ASI 178MM.

Below are the images created by three scans at 8x sidereal rate (in DEC) while the HEQ5 mount was tracking in RA at solar rate. Due to issues with the SolEx processing program "init", there was some geometric distortion that made it difficult to merge the images into a single mosaic. I therefore present them as three images. Click on the images to see them full size:


For comparison, after finishing the SHG imaging (the three scans above were taken between 16:15 and 16:20 UTC on June 13), I quickly took some short videos using my Lunt60 in single stack mode. Here is a very quick process of the images. They were taken with the ASI 290MM so two images were necessary to capture the entire disk: 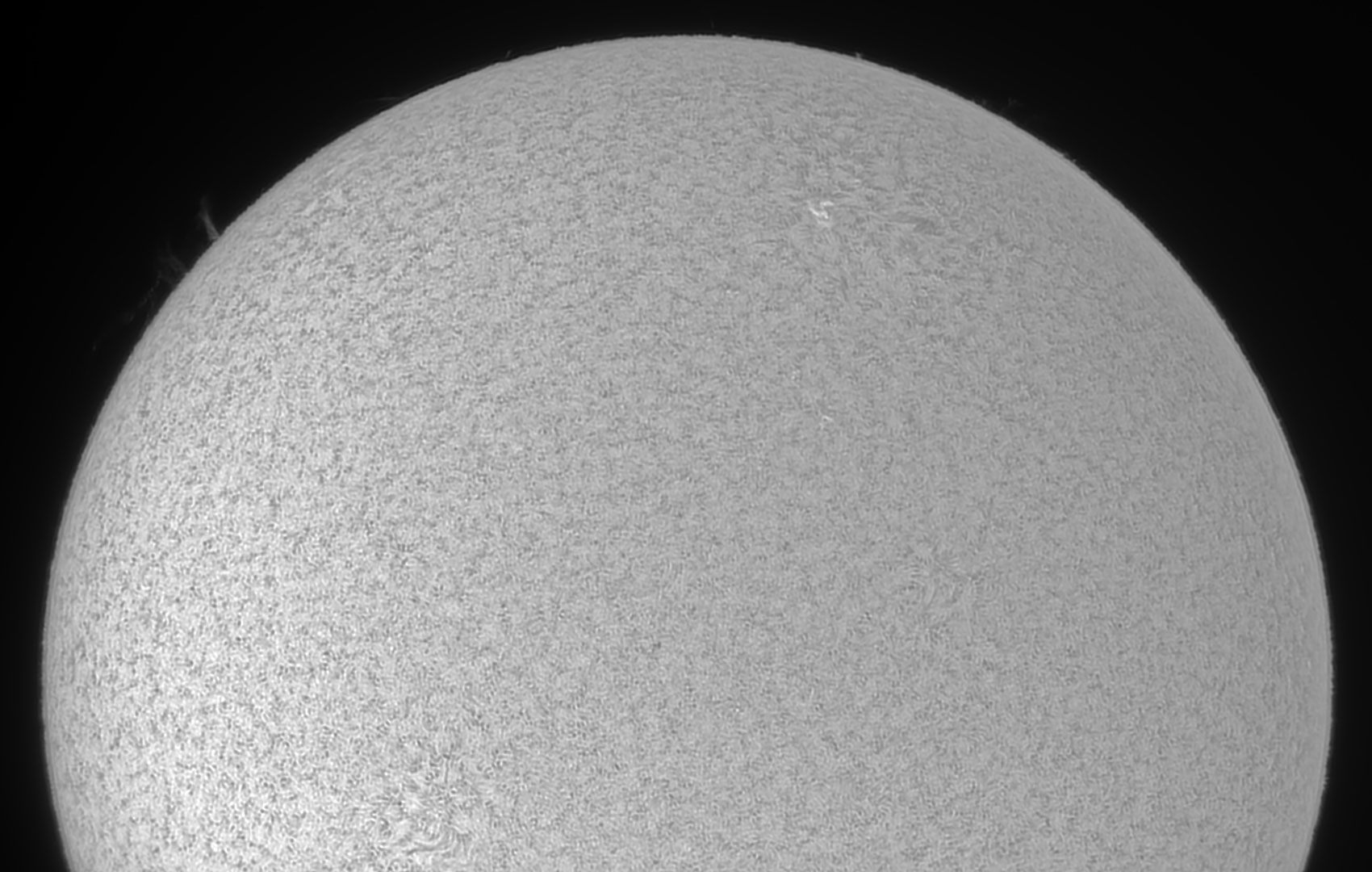 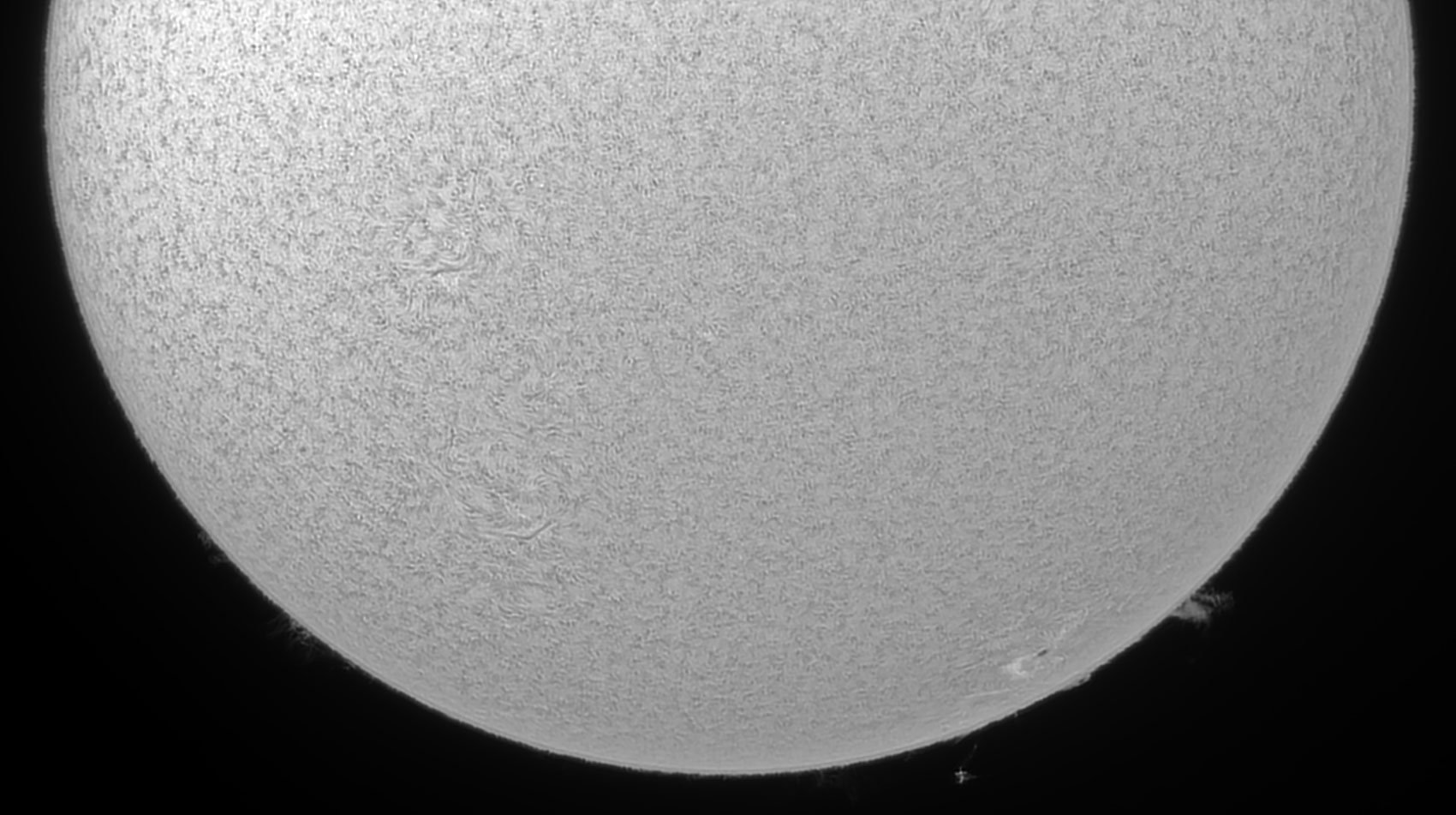 I did not do a very good job processing the Lunt60 videos and I did notice the seeing when they were taken (at 16:53 and 16:54 UTC) was also not very good. I would say that the SHG images, despite being only single frames, show a surprising amount of detail. My impression is that using the 100mm diameter refractor did give a little bit better resolution than the 80mm refractor used previously.

A small SHG focus trick: normally, the best way to focus the telescope is to find the edge of the Sun's disk and make sure that it is sharp. But a better way to get really precise focus is to realise that what we really want to maximise is the "wiggles" in the spectral line as the telescope scans. So in these images, I used what I call "focus scanning": set the telescope to scan slow, around 2x sidereal rate, and adjust the focus until the wiggles in the spectral line have the highest magnitude. This is then maximising the signal in the system. Another advantage is you can do this way from the edge of disk.

Your images are absolutely outstanding! I can't wait to see all the other spectral lines in the future

I've processed three other scans where the data looked a bit better. They were actually the scans going in the other direction from the same video files. I generally record a back and forth in a single file. I had heard that mounts often scan more smoothly in one direction than the other and the first time, I must have chosen the worse side (notice that the edges don't look as jagged). I did a little better job correcting the geometric distortion and decided to do an inversion and some colourisation, which does sometimes bring out highlights (and also hides imperfections). I've flipped the top and bottom from the images posted earlier.

The top one looks very nice in full resolution -- so worth clicking on it! I'm actually a little startled by the details that the very narrow bandwidth of the SHG can bring out. I see one advantage is that the SHG stays on band across the whole field, unlike an etalon in which the bandwidth is difficult to keep constant across a wide surface (compare with the Lunt60 images above which were done quickly and obviously not a good job on keeping the whole disk on band). The seeing during this attempt was actually not very good, so there is good potential for even better imaging.

Very nice. This is on my long list of projects

WoW! I am utterly impressed....

These really are excellent SHG images.