I LOVE finding out about different ways to appreciate the Sun and light in general. Use this forum to post your info or questions about various outside the mainstream ways to appreciate our life giving star!
Post Reply
13 posts • Page 1 of 1

Here are my magnetometer data from the UK leading up to and including last night's predicted CME impact (see Spaceweather.com). As my data show, the main G2 level event in the early hours of the 12th (UT) was preceded by a period of geomagnetic unrest as the interplanetary magnetic field carried by the solar wind became erratic, fluctuating north and south prior to the arrival of the faster flowing, more dense and more erratic solar wind driven by the CME. I've seen some images on the internet of beautiful aurora taken from the UK. Unfortunately I've yet to see anything for myself....one day

If you live in an area from which such events are easily visible, I hope you had a great view.

We were talking about you, we kept getting Spaceweather alerts and I said it would give you some nice data

Good luck Mark. Hopefully things will continue to pick up to produce a great light show.

In the end, the impact resulted in two G2 geomagnetic storms which sparked beautiful aurora down to relatively low latitudes. Hopefully more to come as cycle 25 continues to develop.

nice one
this made news here

Nice to see your record of the event Stuart.

A few clear breaks here but no aurora was visible for me.

With the uptick in activity and more to come, it’s looking very promising, Mark.

If you do manage to see the lights and record the the display as a time lapse, please make a note of the start and end times and I’ll look out for the corresponding geomagnetic data to try to coordinate visuals with data sonification.

Will do Stu, at moment cloud is the theme of things. We were out and looking 12am-1am saturday night / sunday morning but nothing. We have a storm coming in tomorrow (tuesday) so we're just going to sit it out - cook food, drink wine. I'm hopeful after the low pressure has passed through the other side of the front will bring some clearer skies. Either way the camera is charged ready...

Enjoy the food and drink while you wait out the weather. Will be great to see pics if you get some activity and clear skies!

I do hope the low-pressure does remove itself from Iceland Mark. The attached image for Tuesday shows and Wednesday doesn't look much better, but hey, like the Sun, we can't control the weather, rather just try and forecast it accurately...

Best Wishes for yourselves.
Regards
Terry 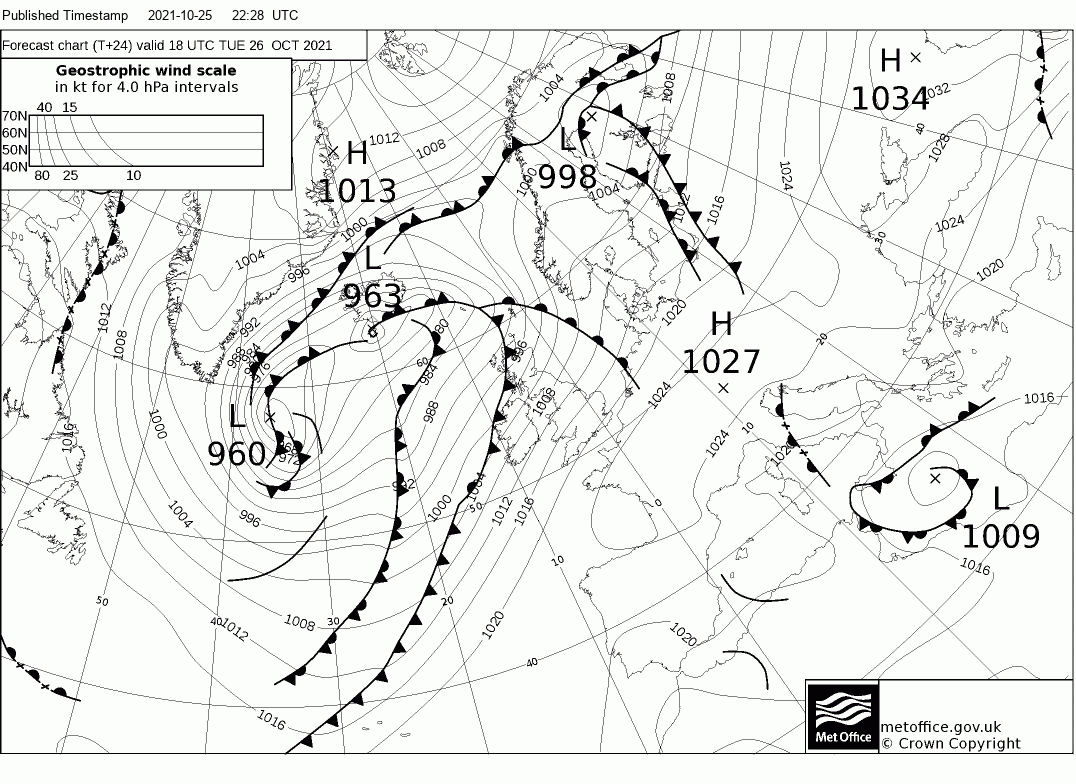 Thanks guys! It was fun staying inside today - the road authority closed all the roads around us because of the wind (virtually no rain), maximum wind speed not far from us was 118mph which isn't to be sniffed at. Was fun watching all the small trees round here bend over nearly horizontal. Still going strong as I type but tomorrow will be calmer, we're off exploring again then, fingers crossed tomorrow evening will have more broken skies...

I don't know what your charts looked like for last night (27th into 28th)? Over here there was absolutely nothing visible... Sky was totally clear, which, was nice - milky way looked great, NGC7000 easy with naked eye, lots of things to see in the 10x42 binoculars (wish it was like that back home!). My forecasts were giving a KP0 (zero), which, I would agree with... We watched continuously from sunset till bedtime, then between my self and Fiona cat napped through the night checking every hour or so, nothing! I even kept taking 30s exposures with the camera in the hope of sub naked eye aurora, but, nothing... Hey ho, been there before, sure i'll be there again...

However... Always wanting to come away with a positive...

When Alexandra, Stuart, myself and our better halves got together in September I talked about the 24 hour moon in Iceland... I'm sure people have heard about the 'midnight sun', where around the time of summer solstice in far north places the sun never sets (and at winter solstice never rises). Here in Iceland it is only at the very very far north of the country this is the case, from the southern part of the island the sun sets briefly for about half an hour in summer, and is only above the southern horizon by a degree or so for half an hour around the solstice.

Anyway, follow me through with a little thought experiment... The moon follows a path that is inclined to the ecliptic (the path of the sun in the sky) by 5 degrees, so at any point in time it is likely to be above or below the ecliptic plane. You may have noticed this at certain times of the year where you are - the moon seems really high or really low in the sky compared to normal - you are seeing the inclination of the moon relative to the ecliptic. Here in Iceland (or other northerly (or far south) places that means there are times when the moon sometimes never rises at all, or, conversely never sets.

Well, guess what, completely by chance, this week was one of those weeks here in Iceland... See the chart from Time and Date below: 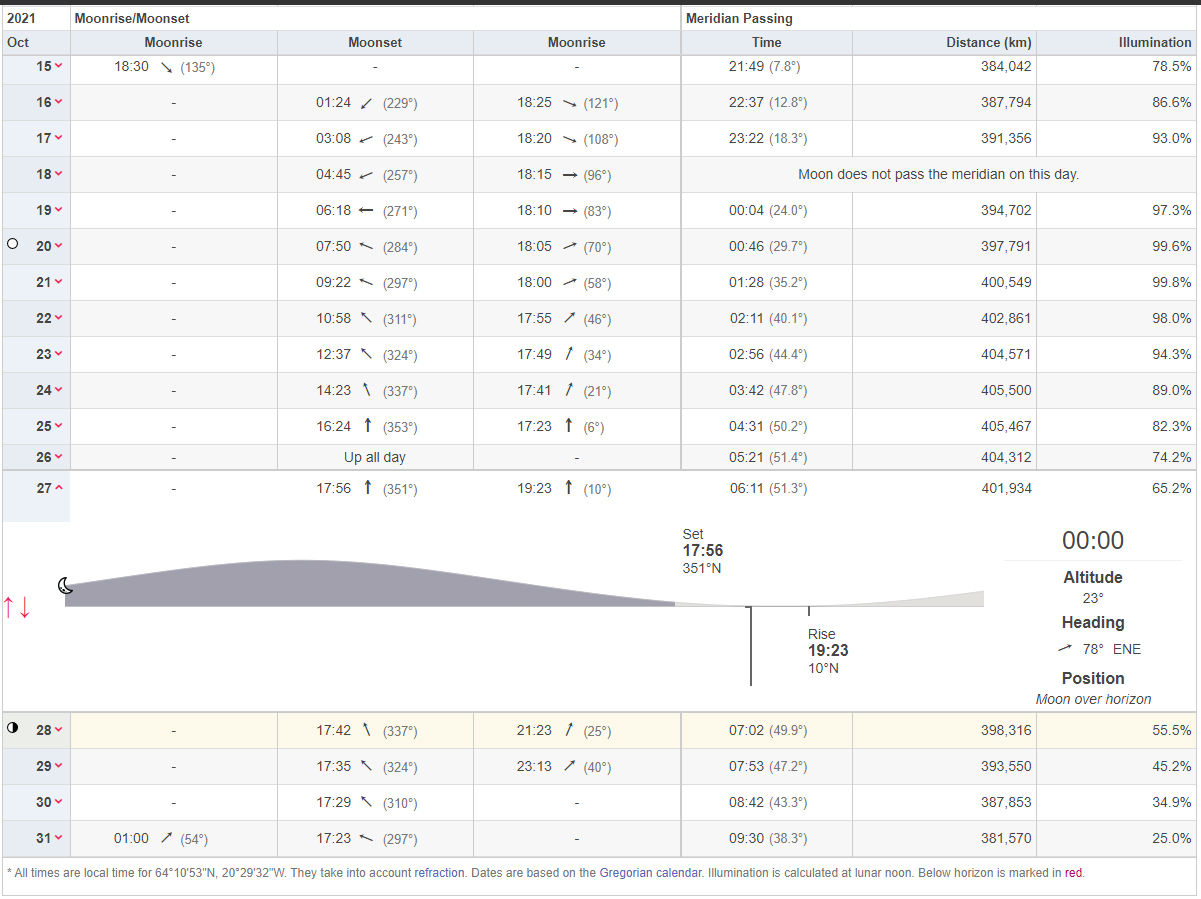 You will see on the 26th, from my location the moon never set, however Tuesday was our 'big storm' with 118mph winds so that was a no no. However, as often is the case, following a storm there are clear skies, and yesterday (Wednesday) this was the case. We went exploring all day and with clear deep blue skies old moon face was with us for company throughout the day. As the day went on I found myself (sub consciously) at this point keeping checking the maps (we were off the beaten track in the Highlands). When we're navigating I often find myself using the position of the sun in the sky as a cue to direction, same with stars at night, and also the moon - knowing what phase it is you know where in the sky it should be relative to the sun. Here late October the sun is dropping quick in the sky and once we were off the tarmac roads and on tracks in the mountains the sun was low in the sky obscured by mountains. But old moon face was hurting my head, he was where he shouldn't be in the sky (at least compared to back home), I kept turning my maps round and taking bearings off known mountains / features to check we were where we thought we were (we were!).

Back to the thought experiment... Imagine a great circle scribed onto the sky that is the path of the moon (or sun!), with it's lowest point at north on the compass point. If the moon (or sun) is at it's lowest or highest point in the sky (6 o'clock or 12 o'clock) on this great scribed circle, the horizontal motion relative to the horizon is at it's greatest, with very little vertical motion. When the moon (or sun) is at 3 o'clock or 9 o'clock on this imaginary scribed circle then the vertical motion in the sky is greatest with respect to the horizon, with very little horizontal motion.

Hind sight is a great thing, and it was only sat gazing at an aurora less sky I realised all this, this is not what used to seeing back home!

The sky is dark here around 6pm, and last night from this point I was out looking. Pretty much due north I could see a brighter blotch of sky, i'd tried taking pictures and while there was a bright patch there but it wasn't green or purple so I disregarded it assuming it to be light pollution from greenhouses (common around here with their horrible sodium lights). Over the next couple of hours this patch of light moved slowly eastwards on the northern horizon, then all of a sudden around 8pm old moon face rose above the mountains in the NNE. It was then I realised this bright patch was actually from the moon, a couple of degrees below the horizon. Would have been a good timelapse, but, hind sight is a good thing. It has certainly given me food for thought, and for future journeys north something to look for.

This should be visible to some of our more northerly solar chatters to a greater or lesser extent - thinking Robert and Arne here (maybe more?).

Hope you don't mind my ramble but the geometry of our heavens are a fantastic thing!